A sinkhole is a depression formed as the underlying bedrock is dissolved by groundwater (usually limestone). Sometimes, surface water entering a crevice in the bedrock may be the cause. Thus, sinkholes may form in low-lying areas where water is ponding. A hole will form, at the top of the underground cavern that is dissolved, and the earth above the hole will collapse into the hole.

Thus, a sinkhole often appears as a column when looking down the hole. This is the "throat" of the sinkhole above the collapsed roof of the cavern. While most people think of sinkholes as being huge obvious holes that can be seen by the news helicopter, most are only a couple feet across and deep. The method of repair involves plugging the throat with larger stones or a lean concrete mixture called "flowable fill". Once the throat is plugged, the hole is filled in with smaller stone and earth.

We have provided a typical construction detail for repairing sinkholes. This information was taken from the Cumberland County Cooperative Extension website. This is only meant as a guide, and not all components included may be necessary. We have provided a list of contractors below who may be able to help you in devising a solution to repair your sinkhole. 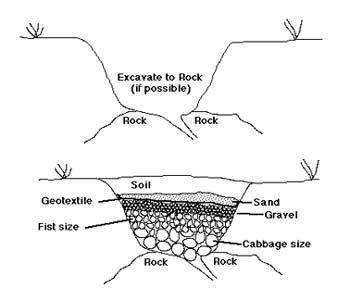 Ideally each layer is six inches to two feet thick. When solid rock is encountered near the surface drop off the bottom layers (that is start with a smaller stone size) or use thinner layers. It is important that the bottom layer be larger than the solution channel opening in the bedrock. The objective is to provide an open path for percolating water so that it cannot carry away soil and cause another sinkhole. The repair, as described, also provides good filtration of infiltrating water.


South Middleton Township does not endorse the following firms as being better or worse than other firms which are not listed. We know these contractors are experienced in the area of sinkhole repair. Other contractors in the area are listed in the telephone directory's yellow pages under "Excavating," or for engineering consultation under "Engineers - Geotechnical."